Posted by oscarbaechler on September 9, 2011
Posted in: illustration. Leave a comment 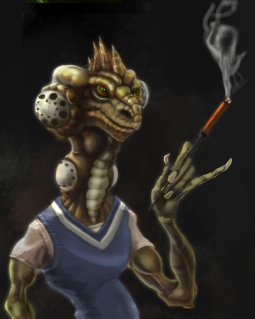 If you look at the original sketch of this dude, he’s just a head study with no torso or arms. My initial instinct was to think about futuristic fashion designs, but then a thought occurred to me. How come in the future, and on alien worlds, nobody dresses casual? Even beyond the current pop culture plague of space marines, most depictions of aliens have them wearing swishy bedouin drapery. Why? The T-shirt pervades modern culture with good reason: It’s cheap, looks good, fits many sizes, can be worn loose or tight, and is a palette for a message. So why do we assume future societies would backtrack into a realm that uses twice as much fabric, zero industrialized production, and no hilarious catch phrases?

So I started with an attempt at “futurist casual” but it just turned into hipster. Crap. So I suppose the next step is attaching some lasers or LEDs to this guy’s comfortable sweater vest.