Posted by oscarbaechler on October 29, 2011
Posted in: sketch. Leave a comment

Yaaay! Finished this sketchbook in under 2 months, without resorting to unpolished unscannable gesture-binging.

Some credit for this completion deadline goes to Star Trek. I successfully watched Star Trek TNG in entirety over the last month or so, and I don’t think I’ve ever had a show so good for multitask drawing.

Sketched a lot of lifeforms from photos this time around. I was going to http://www.arkive.org/random-species over and over again. Although I grumbled about it, I tried to draw the plants, coral reefs, fish and birds it threw at me over and over. In other words, the boring stuff. In retrospect, birds, fish and fish are more interesting than I thought. But mostly, plants are stupid. 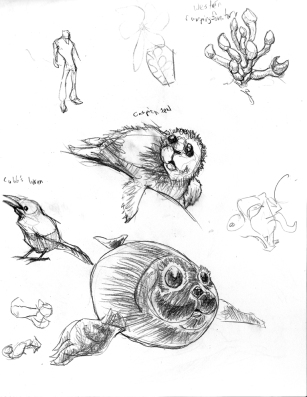 I dunno if it’s “correct”, but I like rendering fur in a specific way. Scribbling back and forth for fur doesn’t look right, because you don’t get wispy points with the fur. Similarly, repeated lines don’t look as good, because it’s hard to get a concise sense of border.

The hybrid is drawing a series of “U” strokes, where the start and end of the U create a wispy, feathery edge for fur and feathes. However, the inner border (the U bend) feels thick and materialized. 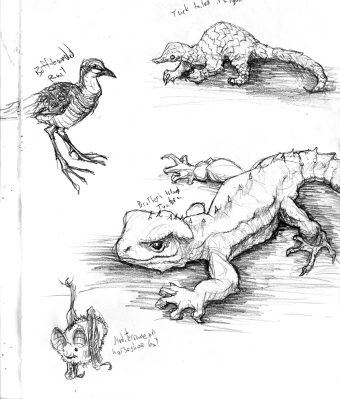 Lizards are one of my favorite things to draw. Their legs don’t fold in a hinge motion. Instead they prop up on their legs and rotate to move them. As a result, their legs bulge with muscle in all the funnest places. Also, their feet (which don’t function like springs ala mammals) have toes that point in slouchy rest poses. If a claw isn’t digging into tree bark, it lays sideways on the nail. It makes them looks a little disheveled and  unplanted. 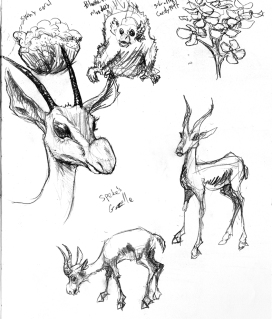 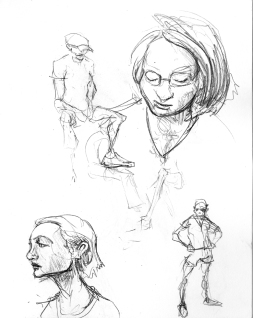 Uploaded in reverse; sketches at the top are the most recent.

Me, doing a hilarious impression of you

Posted by oscarbaechler on October 4, 2011
Posted in: illustration, sketch. Leave a comment