Posted by oscarbaechler on June 20, 2014
Posted in: Uncategorized. Leave a comment

I’ve been seeing tidbits of Freestyle Level Up at Seabug over the last year, and seeing the finished product is a massive enlightenment. Lee Posey and Sage Light Bwk have done an amazing job, and their BNPR homepage should be a routine destination for all Blender users. Freestyle’s development has skyrocketed in recent years, and truly took off when #1. Blender’s render layers reorganized and #2. Freestyle was included by default in Blender. Freestyle’s capability is ready for action, but the Blender community still has a drought of great Freestyle tutorials. Until now. Here’s my review!

If this is totally new to you, a bit of clarification:

Right off the bat, the production value of this series is terrific. Great editing, Clear voice-over, and constant set decoration to keep you engaged in the material. Before I even learned anything, I knew I’d be munching popcorn the whole time. Video game lingo and DBZ references keep you engaged during the most obtuse, difficult concepts.

Freestyle has often confounded newcomers (myself included), because unlike many intermediate blender tasks, it’s not WYSIWYG. Switch your render to Cycles? It automatically works! You turn on Freestyle, hit render, and…well, lines appear, but how do I change ’em?!

Freestyle Level Up hits this problem right on the head with two major approaches. First, it explains the concepts, so you’re not just randomly turning buttons on and off any more. Sage and Lee take your brain and wrap it around the core concepts, so you understand edge types, line styles, and how it plugs into Blender’s overall rendering paradigm.

Secondly, once you know just what you’re dealing with, you can see infinite Freestyle combinations…and that’s intimidating. No worries though! BNPR’s team have come up with a formidable library of Freestyle recipes. Following along with their various recipes will leave you ready to start with the right style (or really close) right away, rather than fiddling for hours to get it right.

BNPR’s Freestyle Level Up video series fills a massive void in the Blender tutorial universe by covering Freestyle both aesthetically and under the hood. But not only is it the first major offering on the subject of Freestyle, it’s also a highly polished, easy-to-swallow romp that keeps you entertained while you learn. I’ve been excited to see Freestyle’s development over the years, but it’s even more exciting to know what the heck I’m doing in Freestyle! If you’re new to Blender, you might want to start somewhere else; Freestyle (like so much of Blender) is practically a program within a program. But if you’re comfy with your F12 key in Blender, Freestyle Level Up is a great way to add a great new tool to your toolbox.

Here’s a WIP shot of a guy I call “The broker.” Imagine him as a floormonger on some sci-fi commodities trading market. The final design will have red LED stock-tickers and news bulletins scrolling along his belt and shoulder apparati. 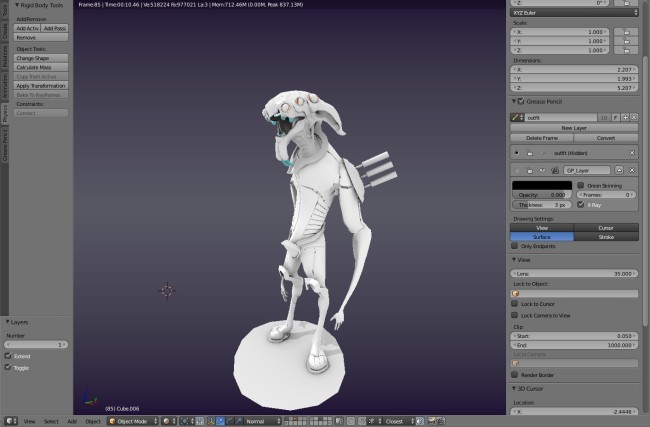 My modeling approach with this dude has been experimental and strange. Many methods exist for “sketching” a sculpt in 3D. Dynamic topology, Zspheres, Blender’s skin modifier. But all of these require under-the-hood nurturing that, in my opinion, makes you lose the effortless quickness that you can have with drawing by hand.

When you’re drawing in that way, a favorite technique is to just use big abstract circles and lines of action to represent a head, a muscle, a torso. Where is the equivalency in 3D? Here’s the modifier stack I came up with.

From here, you can just Shrinkwrap clothes onto the character, then begin retopology modeling what you actually want. I got something that felt really alive and stylish, and the model served as some baseline concept art.

Should I take this to sculpt first, then finish modeling? I don’t know. Instincts say yes, but I’m having fun with some old-fashioned modeling first, sculpt later pipeline.